Lewisham Way, or part of the A20, is a major route into and out of London. Located in the south east of London and heading south it runs from New Cross towards Lewisham. The road continues towards the outskirts of south east of London. Many lorries and coaches going to or coming from the port of Dover as well as vehicles to and from Kent, Sussex and some parts of Essex travel along it. There are also a number of bus routes going into and out of central London that use the road, and at rush hours especially, cyclists weave in and out of the moving and stationary traffic.

At the start of Lewisham Way in New Cross is Goldsmiths, University of London, including what is now called the Richard Hoggart Building, and what was originally the main building of the navel college out of which Goldsmiths emerged. Heading south east, about a mile down the road at the other end of Lewisham Way, just before it turns into Loampit Vale and enters Lewisham, is Lewisham College, part of Lewisham Southwick College (LeSoCo), a further education college with over 13,500 students. 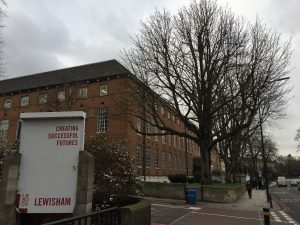 The walks that I’m conducting as part of this Residency begin at Lewisham College and end at Goldsmiths, or vice versa. The road is interesting, not only in terms of the range of vehicles that travel it, but also because it includes shops, charities, cafes, restaurants and residential housing. Just off this main road are a train station, mosque and church, as well as housing built over the past 150 years.

My focus is on how temporality is arranged and encountered on this stretch of road. There are many ways in which this could be done – as I outlined in the first blog post, I am looking primarily at objects, devices and materials. There are also many different methods that might be deployed to capture and think through encounters and experiences of temporality – I am working with sensory methods, including photography, video and sound recordings.

Sensory sociology, broadly conceived, aims to focus on what has tended to be bracketed out of sociological accounts of the world, and, relatedly, to recognise how the world is experienced in sensory ways. For example, John Law and John Urry note both that ‘[t]he fleeting, the ephemeral, the geographically distributed, and the suddenly proximate are of increasing importance in current senses of the social’, and that current sociological methods are ill-equipped to deal with them (2004: 403). Lisa Adkins and Celia Lury describe a contemporary ‘sensate empirical’ (2009: 18), Les Back argues for an expansion of ‘the sensory dimensions of sociological attentiveness’ (2012: 28), and researchers such as Lata Mani (2013) and Kathleen Stewart (2007) experiment with interdisciplinary modes of communicating sensory experiences of being in and with the world. Indeed, many sensory methodologies draw and adapt from practices in art and design, appreciating that sociology does not have the monopoly on ‘telling about society’ (Becker 2007), and that non-textual methods and modes of dissemination are important in involving (human and non-human) participants and audiences in sociological research (Puwar and Sharma 2012).

Importantly, such methodologies are also beginning to be taken up to investigate temporality (e.g. Back and Gunaratnam 2013), and futurity more specifically (see for example Lyon and Carabelli 2015, Ivinson and Renold 2013, Coleman 2016, Future Matters Collective, Cardiff). These approaches recognise the intangibility of temporality and futurity, which makes them tricky to study (e.g. Adam 2009), and harness the interdisciplinarity and affectiveness of sensory methods to ‘engage’ and relate to – if not capture and contain – the future.

One of the aims of the Residency, then, is to see what sensory methods might be able to open up regarding how temporality and the future is organised and engaged on Lewisham Way.

Ivinson, G. and Renold, E. (2013) ‘Subjectivity, Affect and Place: Thinking with Deleuze and Guattari’s Body without Organs to Explore a Young Girl’s Becomings in a Post-Industrial Locale’, Subjectivity, 6(4): 369-390.