Walking along Lewisham Way and documenting encounters with temporality, I came across a number of doorbells: on homes, shops and organisations. The latter includes the Lewisham Arthouse, a charity that supports arts and arts-based learning through creative workspaces, specialist facilities and exhibitions and events, whose intercom system and bell is shown in this photograph. 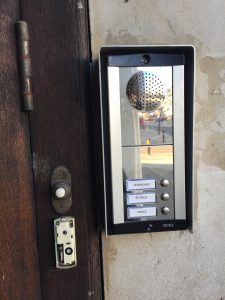 Focusing on a doorbell as an encounter with temporality may at first seem strange or irrelevant. However, one of the aims of this Residency is to explore some of the objects, devices and materials via which temporality is organised, patterned and encountered. This blog post sketches out some first thoughts regarding the temporality evoked by the doorbell. It concentrates not so much on sensory methods as the temporal sensations and affects that a particular device may produce.

The doorbell may be understood as what Bruno Latour (1992) calls a ‘mundane artefact’ that arranges human action, but which is often missing from sociological and other social scientific accounts. For the purposes of this study, the doorbell may be conceived as establishing a particular temporality – one that is anticipatory in how it is felt and oriented around in embodied ways. Once a doorbell has been rung, somebody anticipates a response and somebody is expected to respond. The doorbell ringer waits in expectation and the respondent is expected to move into action. In this sense, it is an everyday, ordinary technological device via which the future is encountered and experienced.

Anticipation involves an affective experience of the future; as Vincanne Adams, Michelle Murphy and Adele E. Clarke put it, with anticipation, ‘our presents are necessarily understood as contingent upon an ever-changing astral future that may or may not be known for certain, but still must be acted on’ (2009, 247). This is an affective state because ‘[a]nticipation is the palpable effect of the speculative future on the present. […] As an affective state, anticipation is not just a reaction, but a way of actively orienting oneself temporally. Anticipation is a regime of being in time, in which one inhabits time out of place as the future’ (2009, 247, original emphasis). As an anticipatory device, the doorbell may be seen as affective then; it is embodied and felt.

Andrew Metcalfe (2000) discusses the doorbell as a specifically temporal and future-oriented device. Reflecting on being the respondent to a rung doorbell, he charts the various affects he feels as a result of the anticipatory character it produces: dread, doom, anxiety, apprehension, suspension. The future brought into being by the ringing of the doorbell, he writes, ‘is not like the tomorrow that never comes, not something I’m trying to catch; the future, already determined, has impatiently doubled back to catch me!’ (2000: 6). The future has come to call on him – it is a certainty (there is somebody at the door who expects something) that nevertheless remains uncertain until the door is opened (who that person is and what it is that they want is unclear).

Importantly, Metcalfe argues that the unexpected ringing of a doorbell disrupts a range of organisational methods put in place by modern subjects to ‘minimise the possibility of impertinent encounters’ (2000: 14), including timetables, answerphones, and security cameras as well as affects such as reservation, flippancy and defensiveness. The doorbell indicates that:

‘I can no longer recognise myself as a subject in Euclidean space and chronological time; I am not a free agent, distant from the other;                 time does not move in a line from origin to end; events cannot be explained according to a causal logic based on antecedence; meaning doesn’t derive from a process of representation; mystery is neither the opposite of knowledge nor a lack to be filled with knowledge’ (2000: 14-15).

Instead, the doorbell is capable of bringing about an affective encounter; it ‘has miraculously made past, present, future and eternity converge at the doorstep’ (2000: 20).

The future that is produced through the anticipation of the ringing doorbell does not unpeel from the present in a straightforward fashion, but rather is non-linear and intensive. It is that which comes to take over the present – it has ‘doubled back to catch me’ – and which thus involves multiple temporalities at the same time. It is also that which is affective in the demands and moods it makes. Mundane it may be, but the doorbell indicates the multiplicity and complexity of temporality that may be generated through everyday devices.