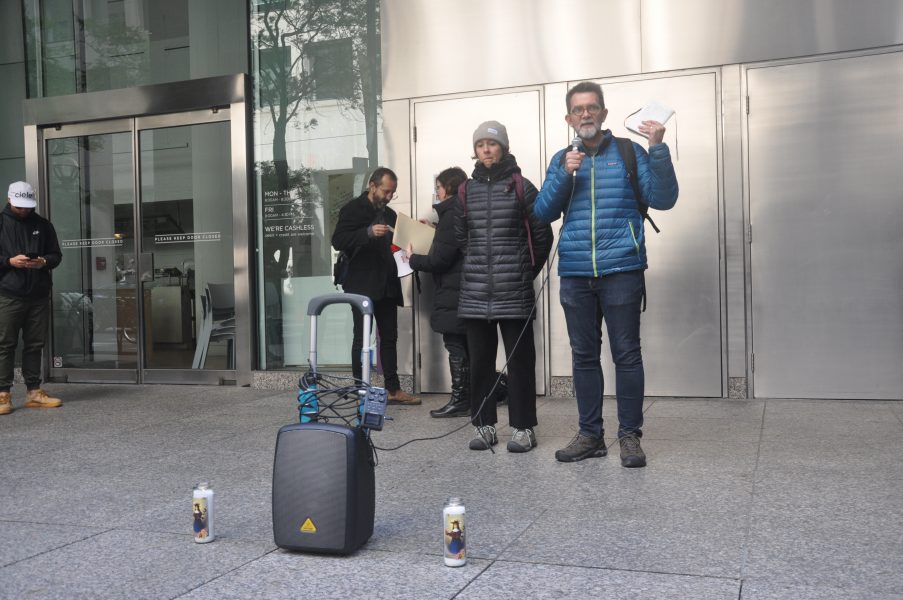 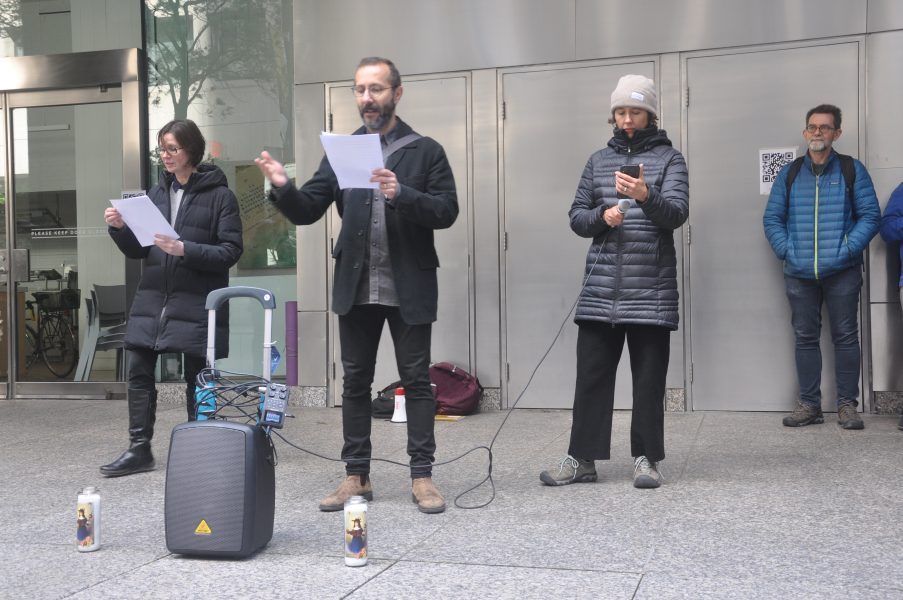 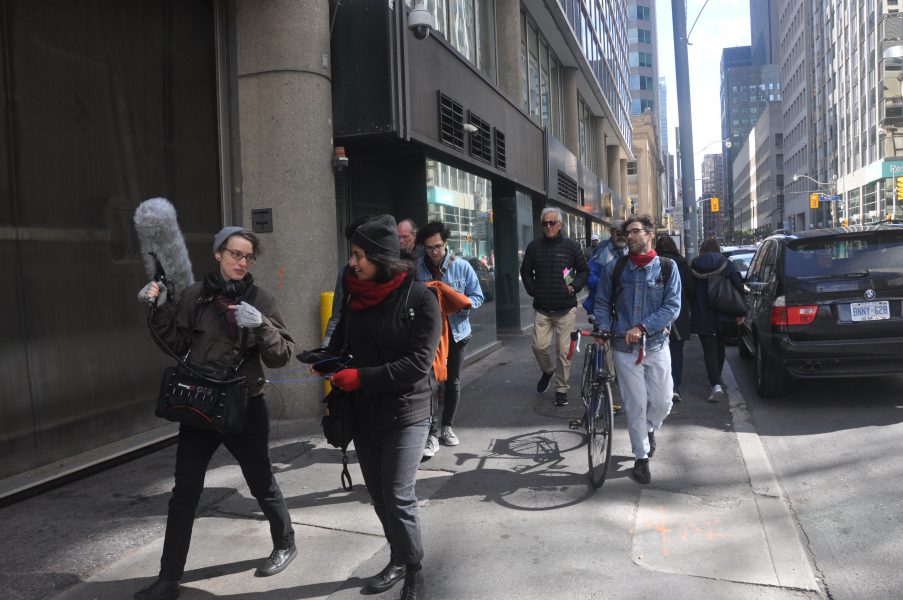 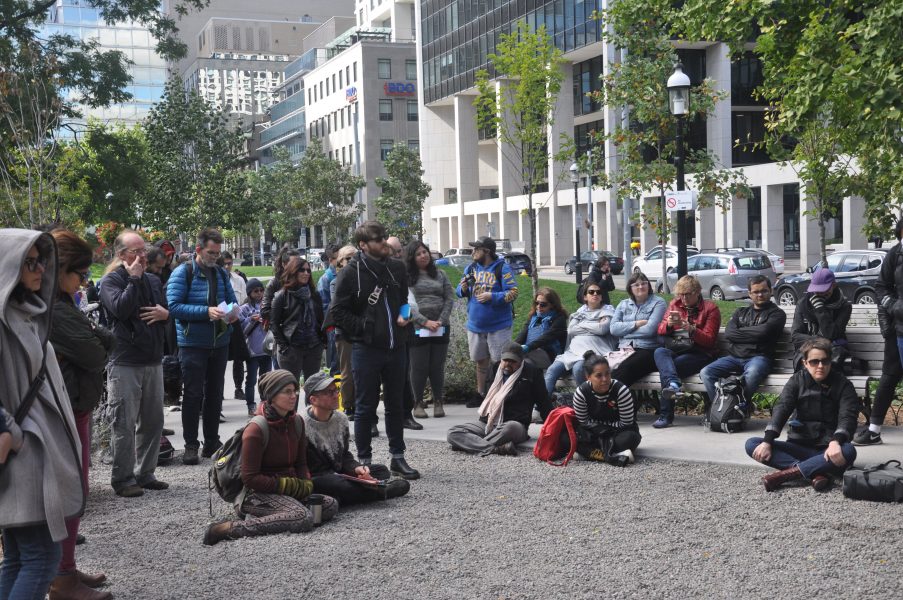 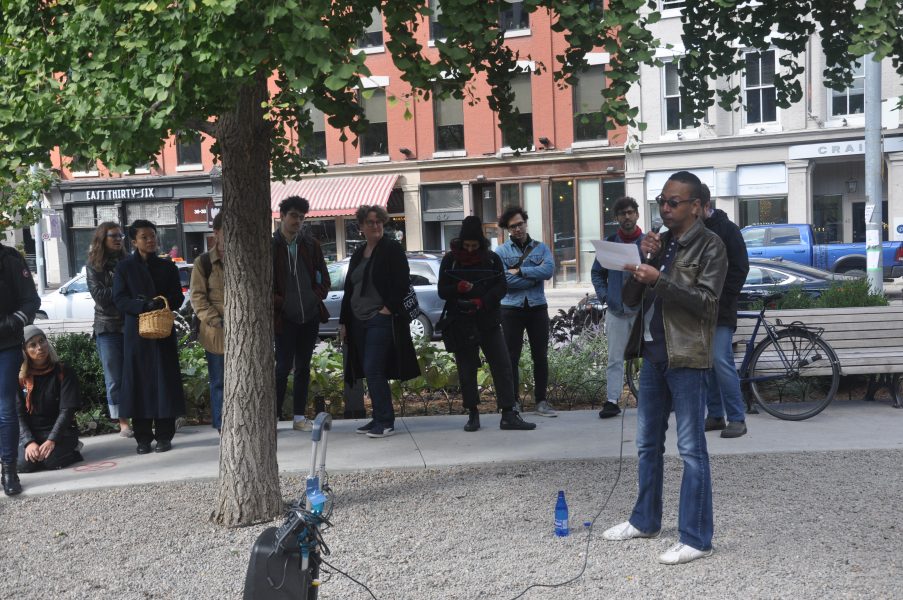 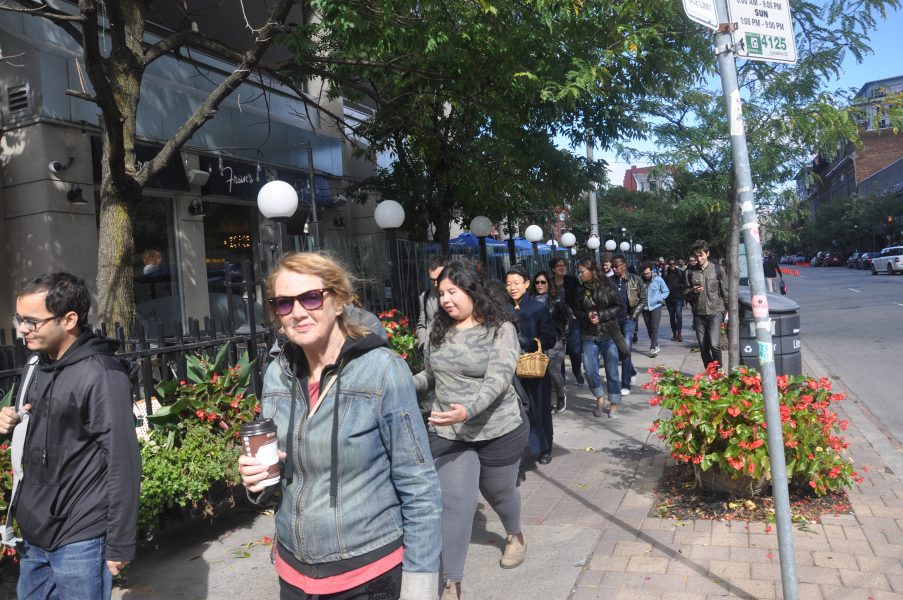 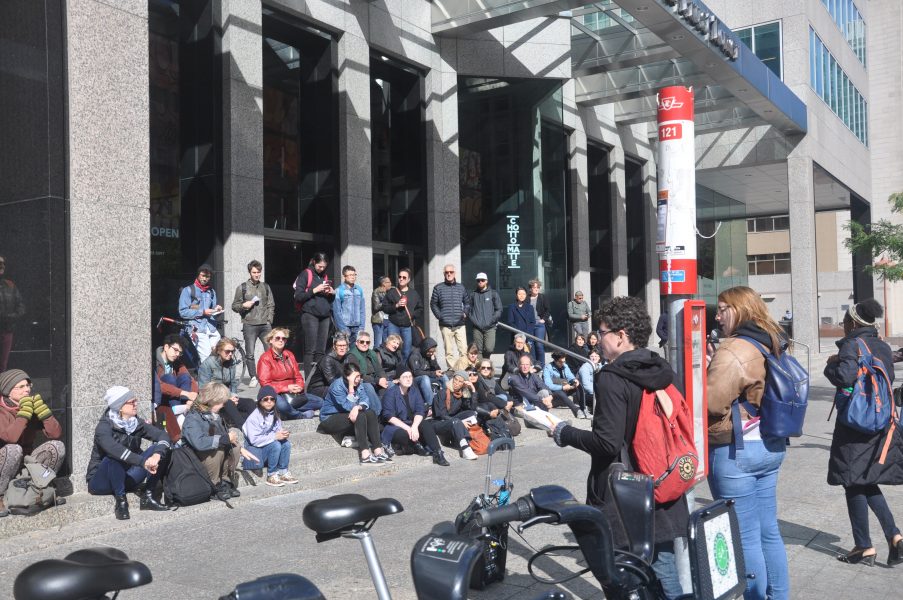 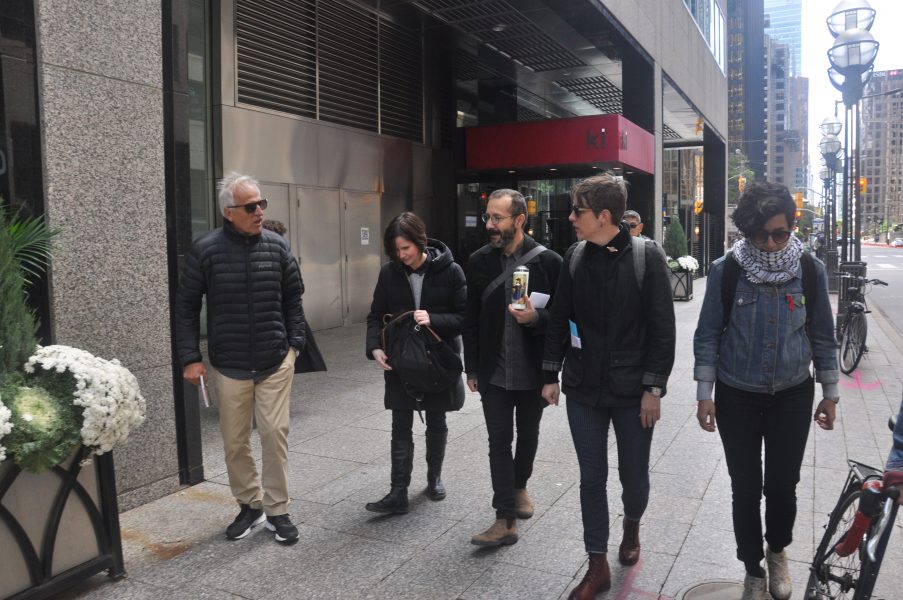 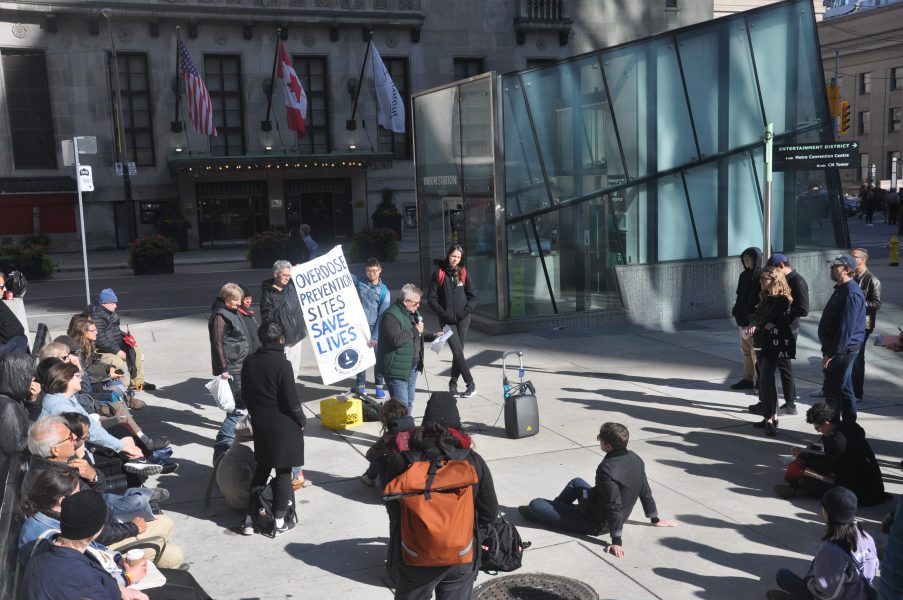 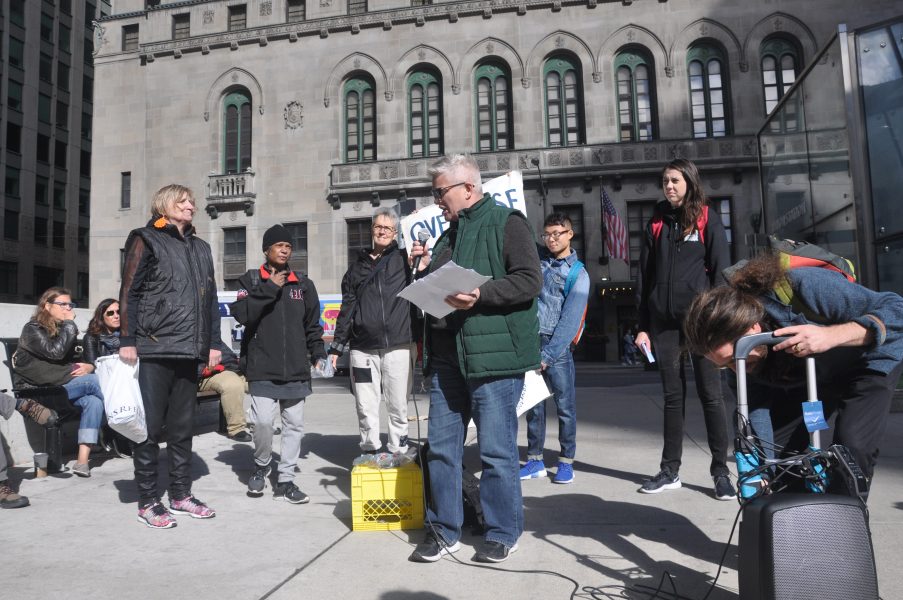 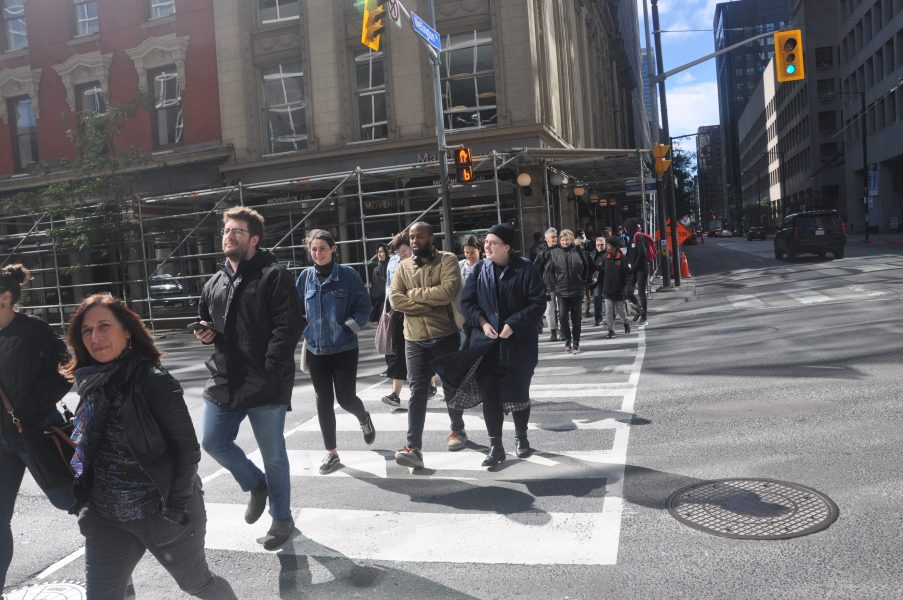 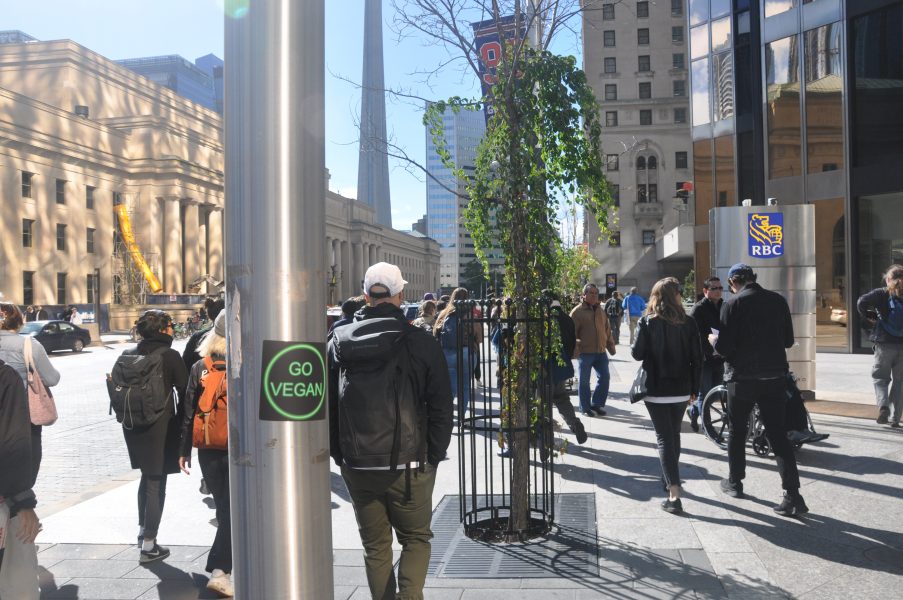 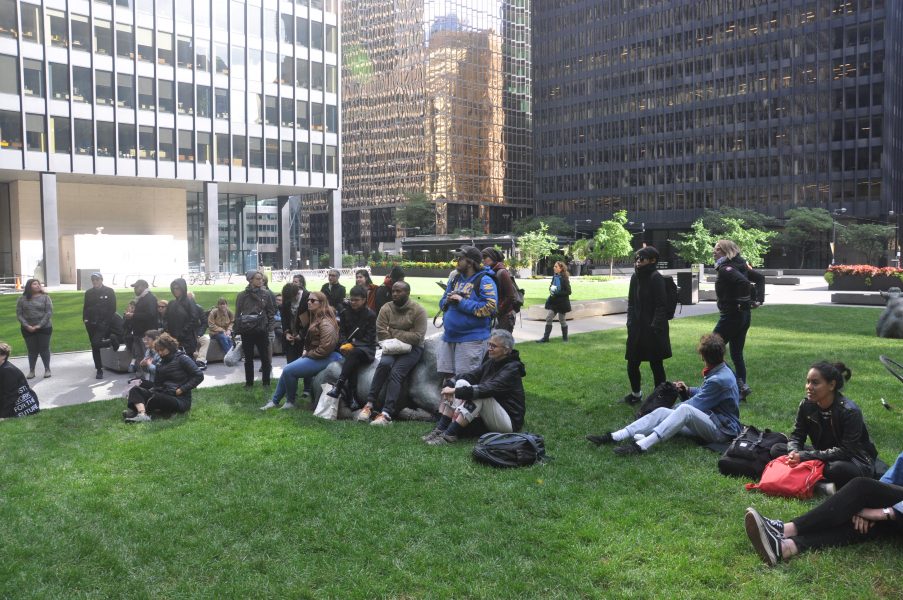 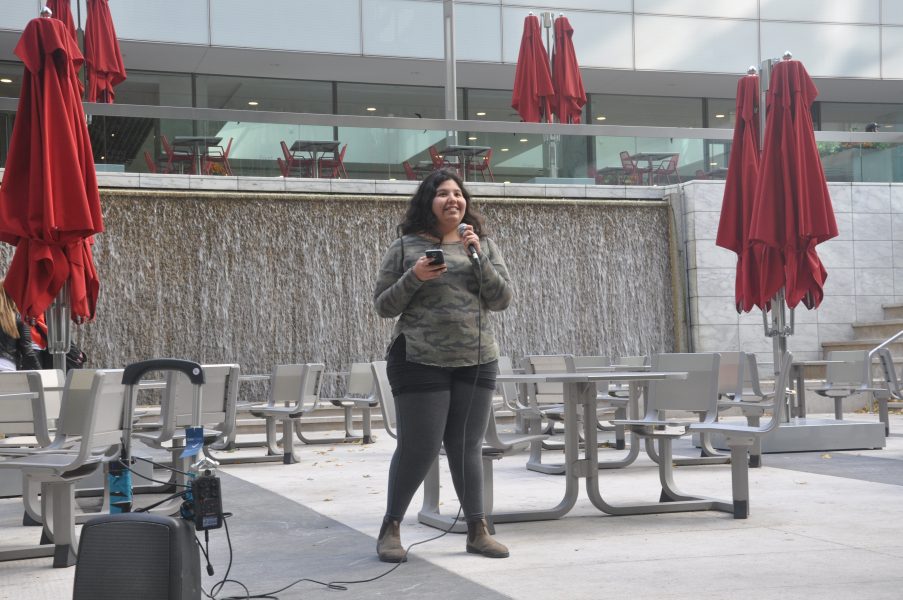 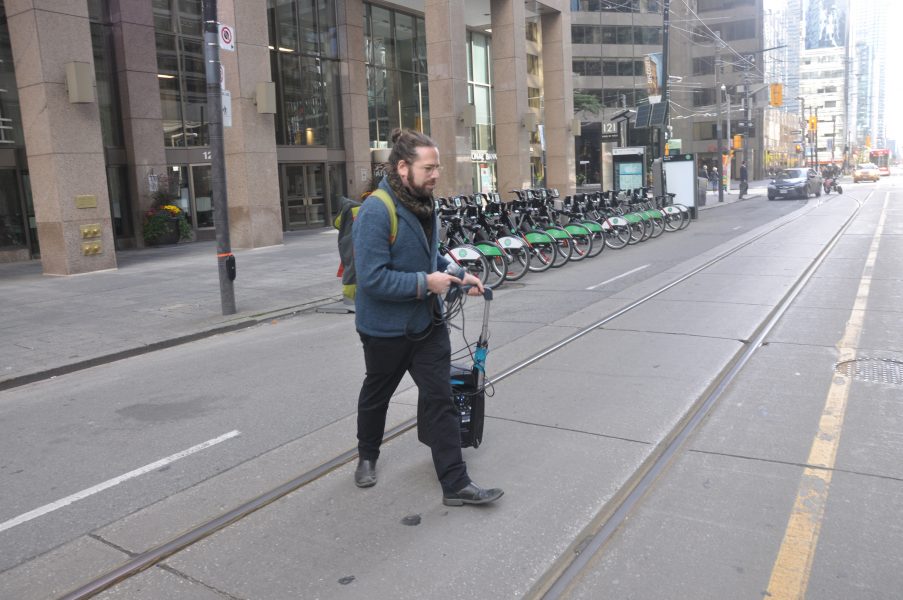 The Bank The Mine The Colony The Crime: A Collaborative Walking Tour

Toronto’s financial district, built on stolen Haudenosaunee and Mississauga lands, is home to many ghosts, notably those dispossessed by the global extractive industry headquartered on the city’s infamous Bay Street. The violence of (neo)colonialism haunts the corporate towers and cleansed streets of the financial district; it also haunts the pensions and savings of millions of Canadians who, knowingly or not, are invested in the industry via the neighbourhood’s preeminent financial institutions.

This glass, metal and concrete zone is a reactor of the imagination, where the abstract codes of global finance fuse with the settler colonial logics of racialized extraction and neoliberal capitalism. But what else might the imagination generate if we assembled ourselves otherwise? What resilient pasts, rebellious presents and radical futures flow beneath the surface, ready to erupt? How can we imagine and enact the complex solidarities we need to overturn the financialized global order of deadly inequalities and the fascistic spectres it unleashes?

“Objects in Mirrors” presents the work of Mexican artists who directly challenge practices and politics of foreign extraction in their country. Our objective is to introduce participants to Canadian extractivism in Latin America via the critical perspectives of artists living in directly affected areas. Participants will be given the opportunity to view visual art and performances of some of the key anti-extractivist artists in Mexico through a link to a dedicated website, sponsored by the Institute for Creative Exchange.

Salvador Alanis is a writer and cultural promoter. His interest in interdisciplinary work drove him to experiment in visual art, multimedia, television, and film. He has been awarded by the National Fund for the Arts in Mexico and is the Co-Founder of the Institute for Creative Exchange. He was born in Mexico, has two kids and lives in Toronto.

Ximena Berecochea is a photo-based artist and a professor at York University. Her work has been shown in various countries including Mexico, Canada, the United States, China, Spain, Perú and France. She is the Co-Founder of the Institute for Creative Exchange, in Toronto. She was born and raised in Mexico and lives in Canada since 2007.

Eva-Lynn Jagoe is a writer and Associate Professor of Latin America Studies and Comparative Literature at the University of Toronto.

Eulogy for a Village: Gentrification and the Disappearance of Queer Sexual Geographies
Christopher Smith

This “pop-up” talk considers the rise of gentrification in the Church/Wellesley village. Once understood as a necessary site to ensure an autonomous lgbtq community, rising rental costs have facilitated the displacement of persons and historic establishments. With the homonormative turn in queer politics one guiding assumption was that an alliance with corporate institutions would benefit queer communities through the redistribution of finance. This however is far from the case as seen in the gradual disappearance of venues that enabled a vibrant sexual culture. Whether speaking of bathhouses, night-clubs, or one’s favorite watering hole these sites of pleasure are increasingly lost amidst a rising condo boom. Thus, this talk is framed as a eulogy to those cherished spaces gone but not forgotten.

Christopher Smith is a Ph.D. candidate in the Dept. of Social Justice Education at OISE/ University of Toronto. His research interests reside in the productive interstices of Black Diaspora Cultural Studies, Queer and Feminist Theory, including Post-Colonial and Decolonial studies. They are currently teaching in the Women’s & Gender Studies Program, in the Dept. of Historical & Cultural Studies (University of Toronto, Scarborough).

The Mining Injustice Solidarity Network (MISN) is a Toronto-based activist group that organizes to draw attention to and resist the negligent practices of Canadian mining companies, who comprise over 75% of mining businesses worldwide. In solidarity with affected communities and in response to their calls for support MISN seeks to: educate the Canadian public on mining injustices in Canada and around the world; advocate for stronger community control of mining practices, and in support of self-determination in mining-affected areas; and agitate against corporate impunity and in support of substantive regulatory change.

Golden Reflections, Ghostly Projections
A projection installation on absence and the collapsing of distance
Christopher Alton and Zannah Matson

This project presents a series of visual interventions that repurpose space in the city to make evident connections between extractive violence and the core of Canada’s financial systems. Inspired by the powerful work that haunting can perform within urban space, the installation will use methods of collage and superimposition which draw attention to absence and hold the free flow of capital over lives and the environment to account by making visible connections which are often hidden. Of central importance in our visual study is the Royal Bank Plaza on 200 Bay Street. As a symbol of extractive wealth, RBC is pivotal to embedding codes of global finance inside settler societies as it simultaneously helps to drive the financialization of everyday life in Toronto. Symbolic of this dual power, the gold-clad building looms over Front Street, welcoming passengers out of Union Station. Yet while the Plaza reflects a golden-mirrored hue back on the city, this obscures the much dirtier machinations operating within the building. Working between the “site” and the imagery of memory through superimposition, the visual materials included as a part of this intervention will look to annihilate distance between sites of extraction and the co-constitutive concentrations of capital, collapsing them to tell the ways in which Toronto is complicit in the violence of resource extraction. In doing so, ghostly images reveal Canada’s extractive financial industry lurking behind every gilded façade.

This pop-up lecture and harm reduction table will explain how finance districts organize urbanized accumulation that feature gentrification on the one hand and the surveillance/carceral state on the other hand. Speculative real estate value is enhanced by violent expulsions of people from the neighborhood, criminalizing and incarcerating folks deemed to ‘not belong’. These tactics manufacture the deaths of black/brown sex workers, indigenous communities, and queer/trans communities. Harm reduction hubs in the downtown area intervene in these logics, creating caring communities among those against whom the police state has waged a war: the criminalized poor. Harm reduction is one site of resistance that insists on the livability and dignity of Black/Indigenous Queer/Trans lives, and advocates for decriminalization and abolition of prisons.

The pop-up harm reduction table represents ‘how to’ reclaim a piece of sidewalk from the economic imaginary of exchange value, creating a temporary communal space – a refuge. The refuge can embody social relations that prefigure the kinds of non-capitalist decolonized spaces we would like to build.

Jamie Magnusson teaches a course on Urban Poverty and Rebel Cities at OISE, University Toronto. She writes on financialization and capitalism’s production of illegal economies. She has been involved in sex worker-focused harm reduction with the All Saints Community Centre for about 10 years.

From the perspective of the presenter’s own experience as an international student from Hong Kong and research from online sources, this pop-up talk will examine the indispensable economy of international education in Canada and how it relates to the cultural concept of education as investment, economic dreams and the academic industrial complex. Specifically, the talk will explore the various factors behind the significant number of students coming from mainland China to study abroad, the related social issues that the state and education institutions fail to address, and Chinese students’ heterogeneous attitudes towards the idea of assimilation.

Vanessa Gray is an Anishinaabe kwe from Aamjiwnaang First Nation, located in Canada’s Chemical Valley. Vanessa is a research assisstant and project director with the Technoscience Research Unit at the University of Toronto. As an organizer with ASAP, Aamjiwnaang and Sarnia Against Pipelines, she works with community members to bring awareness to the health issues resulting from her reserve’s toxic surroundings.

New Mineral Collective is the largest and least productive mining company in the world. We provide counter-prospecting operations and geo-trauma healing therapies.´In the Toronto´s financial district NMC provides an audio therapy guiding listeners through a stratification of Toronto´s financial district, looking Canada’s entanglement with the shady realm of the extractive industry and its symbiotic relationship between geology, nationhood and power.

Tanya Busse (born in Moncton, NB, Canada; lives in Tromsø, Norway) and Emilija Škarnulytė (born in Vilnius; lives in Tromsø/Berlin) are New Mineral Collective (NMC), a platform that looks at contemporary landscape politics to better understand the nature and extent of human interaction with the Earth’s surface. As an organism, NMC infiltrates the extractive industry with alternative forces such as desire, body mining, and acts of counter prospecting.

The bank, the mine, the colony, the crime – a walk in progress is a speculative sonic response to the walking tour. This response will be comprised of recordings of the speakers / interventions / performances as well as the sounds of the financial district as we pass through it. After the walk a creative composition will be assembled out of the recorded materials.

Sherry Ostapovitch is a sound artist whose work often incorporates field recordings and multi-channel sound installations. Recent work includes the ambisonic 360 degree sound installation, In a Queer Time and Space which assembles memories, places, and acoustic abstractions while grappling with the impermanence and fluidity of queer geographies.

Anita Castelino is a PhD student in Geography at York University. Her previous soundwork collaborations have been exhibited at New Adventures in Sound Art (NAISA) and across the UK as part of the The Listening Wall – featuring John Cage, Pauline Oliveros, and Yoko Ono.

Writing of their project WalkingLab, Sarah E. Truman and Stephanie Springgay write: Conventional walking tours can reinforce dominant histories, memories, power relations, and normative or fixed understandings of place. This place-based knowledge serves various forms of governance, ideology, and maintains the status quo including the ongoing violence of settler colonization, and the erasure of racialized, gendered, and differently abled bodies. To counter dominant and normative walking tours that “take place” in specific locations, we developed a method we call a ‘queer walking tour’ to advocate for a critical consideration of place. This criticality, following Tuck and McKenzie, not only recognizes place as socially, culturally, politically, geosocially, and relationally constructed, it also considers “the place-based processes of colonization and settler colonization and works against their further erasure or neutralization through social science research.” The implication of queer walking tours is that they offer a form of place-based research that seeks to attend more responsibly and ethically to issues of place.

RiVAL: the ReImagining Value Action Lab is a workshop for the radical imagination, social justice and decolonization located in Anishinaabe Aki (Thunder Bay, Canada) and active around the world. It is co-directed by activist-artists Cassie Thornton and Canada Research Chair in Culture, Media and Social Justice Max Haiven. RiVAL seeks to convoke the radical imagination using methods that include hosting conferences, symposia and summer camps, hosting workshops, film screenings and talks, supporting research, pedagogy and debate on key themes, publishing in print and online and organizing walking tours and other experimental public events. This event follows on a successful walking tour of London’s financial district organized by RiVAL’s Max Haiven and Aris Komporozos-Athanasiou of University College London in Spring of 2018.