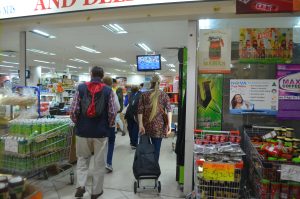 In my first post on walking in service work, I introduce walking (and running) as forms of body work in waitressing. This post is motivated by my reading of the anonymous auto-ethnographic blog posts of Maid In London, a hospitality worker and my seeing the public circulation of the US waitress’ image of her bleeding feet after training in compulsory heels (see link below) and my studies of gender, race and body work. In later posts, I discuss walking and body work on ethnic food tours in southwestern Sydney, drawing on and extending the ideas below. This post introduces a sense of the politics of walking as body work and possible methods for analysing gendered, racialised and classed bodies in motion in the service economy.

In a wonderful homage to his mother’s waitressing in US cafes, Michael Rose stresses the complexity of her body work:

She must be able to balance and carry multiple items, using the hand, forearm, and bicep, creating stability by locking arms to torso and positioning the back. Then she moves, fast, in bursts, navigating tables, customers… Lin Rolens nicely puts it: ‘You learn a walk that gets you places quickly without looking like you are running … This requires developing a walk that is all business from the waist down, but looks fairly relaxed from the waist up’ (Elder & Rolens, 1985 cited 2001: 10).

Such work wreaks its toll. Drawing on his memories and interviews, Rose writes that his mother ‘pushed herself to exhaustion; her feet were a wreck; her legs increasingly varicose; her fingers and spine, in later years, arthritic’ (2001: 22). In her post ‘Run, run, run’, Maid in London describes the gruelling feeling after the 8th shift without a day off:

My body is aching, it’s stiff, my legs feel as if they’re about to seize up from all the running and I haven’t even had a moment to drink water, let alone visit the toilet. I feel like I’m losing my mind. (11 May 2016).

Elspeth Probyn (2004) remembers, in a ‘method’ she evocatively calls an ‘ethno flashback’, how the choreography of waitressing in Canada in concert with other moving bodies under pressure, shaped her body and reactions to other bodies at that time and bends her body in the present.

These brief glimpses into lives, work and bodies rest on innovative methods of bodily memory, and ethnographic evocations. Maid in London too produces a politicised auto-ethnography in which the ‘auto’, the self in autoethnography is usually vividly positioned. In contrast, Maid in London has to be anonymous. In my next posts, extending my recent studies on body work in food work (with Rick Flowers) and coaching, I draw inspiration from these methods, and ethnomethodology to reflect on the gendered and racialised choreographies of tour guides, body work and walkings. I look forward to taking you with me.