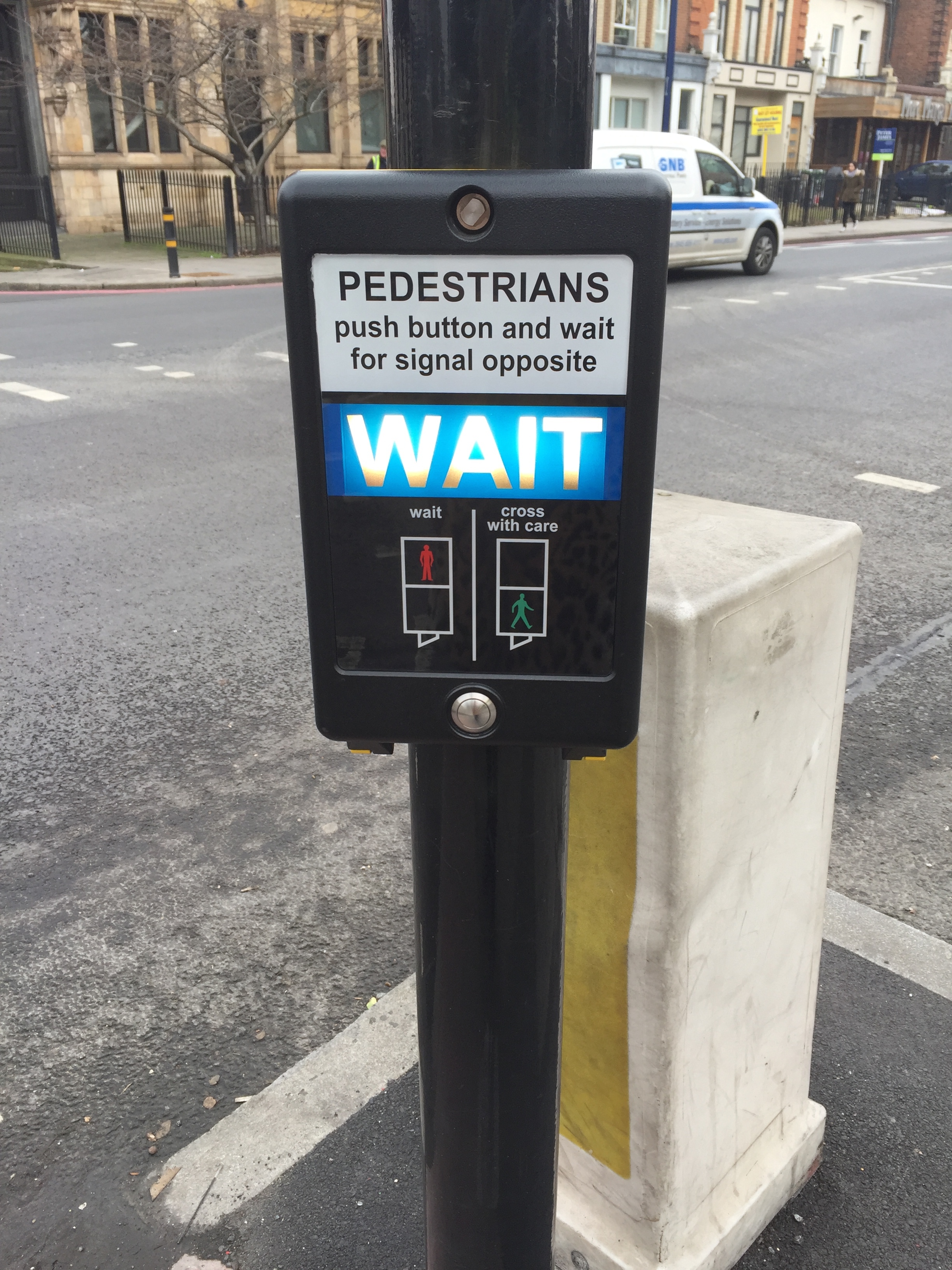 Lewisham Way is a road busy with traffic. Pedestrian crossings are situated along its length. When crossing the road via various pedestrian crossings I encountered several different temporalities, including waiting and rushing or feeling hurried. The experiences of these temporalities are in part organised through specific visual and sonic technologies and techniques, which pattern the speeds and slownesses of walking. In this blog post, I include some raw sensory data produced through my iPhone video camera that attempts to capture some of these temporalities, and more especially how they engage the future.

Invariably, one needs to wait to cross Lewisham Way. At the pedestrian crossings, the need to wait is explicitly signalled via signs that illuminate once the button expressing one’s intention to cross the road is pushed. It is usually accompanied by a sign which features a person standing still illuminated in red on the other side of the road. These signs stays lit up while the traffic continues along the road. Once the traffic has stopped, the ‘WAIT’ sign goes off, and the illuminated red person changes to a green person walking.

At some, newer, pedestrian crossings, the illuminated sign of the green person walking is accompanied by a clock that counts down the remaining seconds to cross the road. This technique both helps to hurry people across the road, and allow them to assess whether or not they have time to cross.

At other pedestrian crossings, the illuminated sign of the green person walking is accompanied by the sound of an evenly paced and relatively fast beeping, again measuring out the time a pedestrian has to cross the road.

Counting down to the future

These three examples indicate that encounters with temporality may be both common and mundane. They also indicate that encounters with temporality arrange and pattern the movements and stoppages of walking. Furthermore, for my particular interest in futurity, these three examples can be understood in terms of an engagement with the future. Drawing on the last blog post on the anticipatory qualities of the doorbell, the waiting and rushing organised through the visual and audio techniques of pedestrian crossings also involve the anticipation of the future – in the case of the sign of the decreasing seconds left to cross the road, literally counting down to the future.

As anticipation is an affective state, such encounters with temporality and futures are, then, necessarily also embodied experiences. What such an understanding of the temporalities of pedestrian crossings therefore implies is that both rushing and waiting can be conceived as ‘relative embodied activity or action’ (Bissell 2007: 284). Indeed, as David Bissell goes on to argue, rushing and waiting may be considered both in terms of ‘an enlivened corporeal sensibility where bodies are highly attuned to their immediate environment and themselves’ (2007: 284), and ‘a tendency to be quite unaware of one’s body, where the body remains passive and acquiescent’ (2007: 285). The aim of this post has been to begin to gesture towards these affective, embodied states, and the role of a future temporality in producing them.