Memory of Walks – Walking to See the Lions

V and I headed to the Aga Khan Museum – a museum of Islamic and Persian art, and Muslim culture in Toronto.

For our next object and perambulatory inspiration V chose a carved ivory head of a lion. It inspired the memory of walks rather than a walk itself. This was probably a blessing as it was very cold and blustery out that day. Being in Don Mills – an area of highways, busy roads, long distances between locations of interest, walking around the environs of the museum was going to be a challenge in the first place. This is a challenge I am still interested in accepting, but maybe when the weather is a little more favourable.

The Lion’s Head is in the exhibition Syria: A Living History, and is on loan from the Royal Ontario Museum. It is from 9th – 8thc. Historic Syria, Archaic Period. It is thought to be a finial for the arm of a chair.

While living in Oxford and when V was just learning to walk one of our favourite things to do was to walk to see the lions. We would visit the lions at the Ashmolean museum and at St. John’s College on St. Giles.

St. John’s, the largest of the 38 colleges at the University of Oxford, has buildings most of the length of the whole of the east side of St. Giles. Part way along the facade of the college are about a dozen or so carved stone lion faces in relief . Each one is unique with a different expression and each one in a different state of decay. They are positioned at head height so are easy to converse with. When walking to the college or into town we would visit the lions. We’d greet the lions and imagine their lion sounds. Some have mouths open, tongues out. For some lions we would do a timid kitten “mew”, for others a a “BLAAAAAH” with tongue extended, and then attempts at the classic lion “ROAR”. For three years we enthusiastically communicated with these stone lions as we strolled by. We also introduced them to our newest member of the family – who unfortunately was too young to appreciate them, but I am sure he will visit and the introduction will be made again in the future. A photo of one of these lions was the first picture to be put up on V’s bedroom wall – a token of a newly formed relationship to this city where we had just relocated to.

Other Oxford lions we used to visit were a pair of female lions on display at the Ashmolean museum.  These lions are also carved of stone. They are lying down with heads upright and touching. Most of their facial detail has worn away, but they are definitely distinguishable as lions. About once a week we found ourselves in the Ashmolean headed towards these lions. This was a perfect place to take V when she was just beginning to walk. The objects and artifacts on display are safely protected from small curious hands, but are also made to be visible to those who are closer to the ground. I used to bring V in there, let her loose, and wander along behind her. She would lead me around. The Ashmolean is a safe and incredible place for a small person to learn how to walk – not to mention it is free.  We would drop in, see the lions, and then continue on our way. 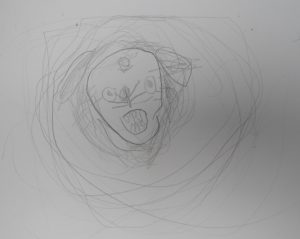 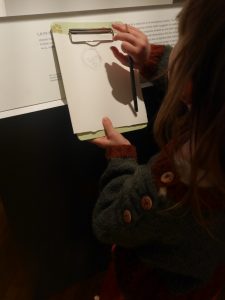