In this second post, I introduce the walking work performed by tour guides on food tours in ethnic neighbourhoods in Sydney, which have historically been stigmatised in racist ways and now exoticised in food tourism and media. The guides do different kinds of walking work and one entails ‘shepherding’- providing a safe and secure route, facilitating comfort, collecting stragglers, monitoring the pace of the group, and keeping the tourists to the timetable and itinerary (Cohen, 1985: 12). In bodily terms, shepherding entails specific types of gestures and bodily movements: such as walking in varying tempo and intensity: for instance, marching, setting the pace, leading from the front, walking backwards turning round to check everyone is there, slowly stopping, moving from a stop to ambling to striding. These enable different forms of sociality and sociability on the tour (Edensor, 2000). Indeed, part of the structure of a tour is that it has a rhythm of a ‘stop-start collective performance’ involving ‘timetabled activities, improvisations, selected route and potted narratives’ (Edensor, 2000). Whilst Tim Edensor (2000) contributes to our understanding of guides’ shepherding body work, he does not take into account the racial texture of place, and the impressions this produces on the tourists’ and guides’ bodies (Knowles, 2003; Flowers and Swan 2015). In contrast, Rick Flowers and I argue that the shepherding work of the guides is partly a response to racial inter-embodiment, touch and contact in the racialised and ethnicised spaces and places of southwestern Sydney. Writing of what Edensor calls heterogenous spaces, usually found in non-Western countries, and not designed for tourists, and experience by tourists as less controlled, more haphazard, with distractions, diversions, and an intensity of sensations and impressions entails a different kind of tourist walking. This may be less linear, more random, and involve negotiating obstacles, avoiding hassle and remaining alert. He writes:

The pedestrian is likely to enjoy a more vivid and varied sensual experience in heterogeneous space…The norms of pleasurably jostling in the crowd, and the different textures brushed against and underfoot, engender a haptic geography wherein there is continuous touching of others and weaving between and among bodies. The ‘smellscapes’ of heterogeneous space are rich and varied. `Soundscapes’ produce a changing symphony…. This sensory onslaught can facilitate a bodily awareness of diverse sensual sensations and stimulate unexpected flights of fancy (Edensor, 2000: 340).

Reproducing a somewhat romanticised and masculinist sense of space, Edensor does not mention how the capacity to walk in this way is differentiated by gender, class, and race. Indeed, Ahmed (2006) stresses how space ‘closes down’, shrinking for racially minoritised people and white women. Moreover, Edensor does not theorise how racialised spaces, and bodily, sensory and spatial practices, may ‘impress’ on white bodies in ways which create fear as much as pleasure. In the next post, I describe how tour guides walk with tourists through such impressions. 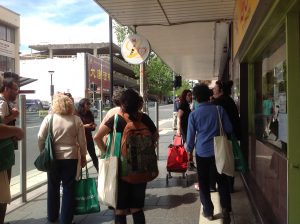