We have been meeting to start our walks at Frontyard, a local, future-facing ‘Not-Only-Artist Run Initiative’. Frontyard is located on the land of the Gadigal Wangal people, now in the heart of the sprawling Sydney suburb of Marrickville. Marrickville has recently been amalgamated with a number of other councils into a super council, called Inner West Council. This move can be read in many ways. For Mapping Edges, the boundaries of government represents another bureaucratic misalignment with many of the important edges we pay attention to that produce locality. The edges we continue to map across the Inner West remain nuanced and particular to their ecosystems. Frontyard exists within and acts across these bureaucratic boundaries, serving as a much needed social space for people from all over Sydney who want to think differently about possible futures and our agency in shaping them.

Although it has only been running just over six minths, Frontyard has already been a starting point many times. Amongst others, Tom Lee, during his residency in April 2016, conducted a public walk to think about aesthetic boundaries and the categories of taste through Marrickville architecture. For Tom what is interesting about Marrickville isn’t the distinction between the beautiful and the ugly, but the uncertainty surrounding the judgements of these categories and the ‘increasingly mixed, dynamic and radically subjective relationship people have with what gives them pleasure and purpose.’ You can see Tom’s way of walking through the world and the path we took together here and @theaustralianugliness.

Also in residency in April, OpenAustralia Foundation used Frontyard as a starting point to walk and document current development applications and the miscommunications they produce.

And during our first residency, Mapping Edges began the process of finding and generating edges in the industrial and residential ecosystems and microhabitats of Marrickville. Since then, we have begun walks from this point many times.

Why do we start walks at Frontyard?

Kirsten Seale, one of our fellow walkers, answers this beautifully, pointing out the importance of recommissioning place collectively. She writes of Frontyard, ‘as a phenomenon emergent from processes of making that (with thanks to Tim Ingold) entail entanglement and correspondence between bodies, senses, spaces, materials and affects, and which are infinitely generative.’ 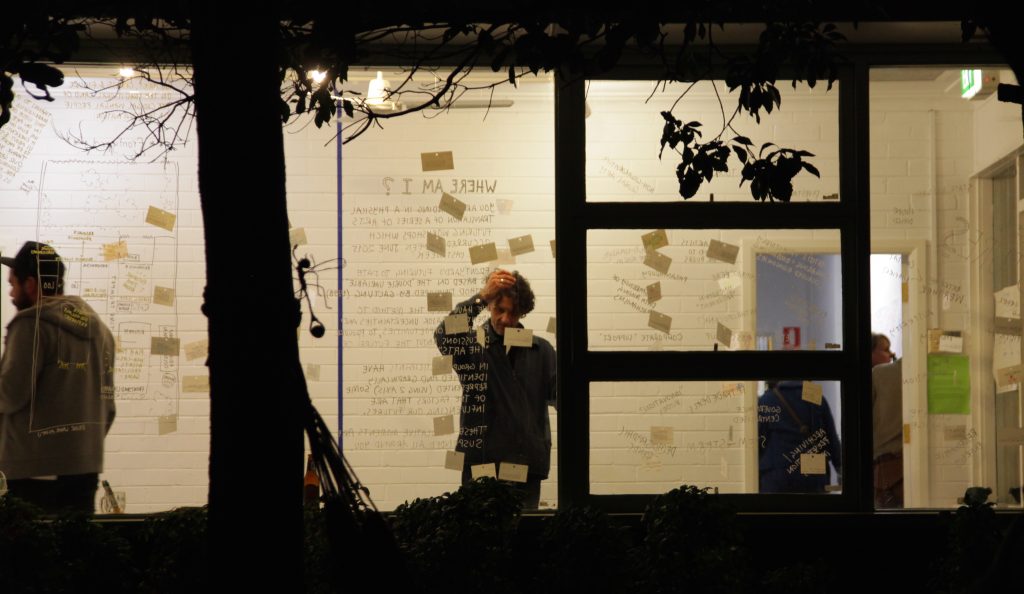