This past July I was invited to create a “walkshop” at the Gardiner Museum in Toronto for a project celebrating the ideas of urban theorist Jane Jacobs. The series of events at the Gardiner, entitled The Make It Real Project, took place in their exhibition hall. Although the events were convened in the museum itself they had little to do with the collection of ceramic objects on the two floors below. This is how Taking an Object for a Walk came to be, as a way of discovering the collection in the host institution whilst exploring the city streets. I have recently been working with my daughter on a few projects, as opportunities for “co-learning”, and this was a continuation of this collaboration.

For this post I will cover some of the outcomes of the walks made by walkshop participants, the walk that my daughter (V) and I did with our chosen object, and I will end with a few final reflections and further questions to attend to.

Notes on the walkshop

Every participant was given at small hand-bound sketchbook, a clipboard, writing and drawing tools, and a worksheet with some questions to provoke further thinking about their chosen object: the object’s name and origin, the “life-cycle” of the object; its raw materials, how it was made, where it has already traveled, and where it may go in the future.

As participants arrived they were given their workshop package, and the aims of the “walkshop” were introduced. They then set off down to the two gallery floors below for about 20 minutes of perusing the collection before heading out onto the streets. There were about dozen participants in total.

A selection of objects and walks

A granddaughter/grandmother couple chose a porcelain owl to take for a walk. They visited trees in the surrounding streets in which the owl might like to nest or perch and the girl drew them in her sketch book. They also looked for places where an owl may catch mice – a dumpster behind the museum. She drew a map of how to get to the dumpster from the museum and the exact location of where a mouse might hide. 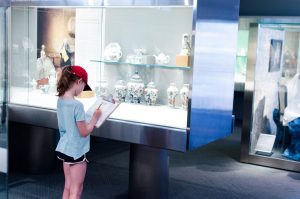 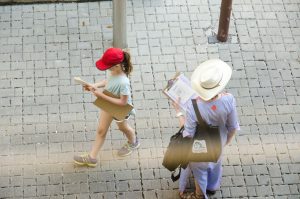 A walk with a large ceramic sculpture of a head by Jean Pierre Larocque, described here by the participant.

“Head #1 is definitely leading. Its’ not liking the noise of the city.
We went to the Korean Pagoda Garden down Charles Street. I have
never been to this place so I am glad to let Head lead me to the quiet
places I also prefer. Then we came to an oak tree dedicated to the
reconciliation in Korea. The oak leaves were like this…Head knows
everything about Oak leaves and trees. Head would like wearing a
wreath of oak leaves and I did rather think I should make him one.
(I think Head could be a “he”). We continued past the Isabel Bader
theatre to a pretty shaded garden with two birch type trees and also
saw a statue of a crucified woman. Head and I both found this a sad
piece and sadly symbolic of women’s journey the past thousands of years…
Head lay down for a while under a bush. He feels there is
so much intensity of energy in the city and he experiences it like an
antennae for the exchanges of people and technology. The cool ground
is so soothing for him. I wait around the garden. Walking we discuss.
Head is so ancient and seems to carry the memory of many civilizations
within his fibres and textures. ….Head says he has a permanent place at
the Gardiner and is glad about that as it is a fairly controlled environment
and no one can touch him. Calm, and cool, and cared for. Far from the
madding crowd. I know I can come back to visit as I have formed a
bond or resonance I will be back to visit with my new old friend….
So glad I am able to meet and renew a resonance with the ancient existing
in the now….”

A woman with her two young children chose an earthenware duck vessel made of two duck shapes that come together as one vessel. They decided to look for doubles and pairs. Some things they noticed were: sisters (themselves), a double decker bus, bicycles locked together, mailboxes, couples eating and drinking, parents holding hands with children. They went to find the ducks some water in the fountain in Yorkville about a 5-10 minute walk away from the museum.

“We were grateful to have our light weight water bottles on our walk; modern day vessels!”

“The ducks are like two sisters. They were hugging”

“The ducks would probably want to have ice cream. Usually they want bread or fish but it’s so hot today.”

This participant drew her object and then went to find lettuce in grocery stores and lettuce like vegetation in parks and gardens. She photographed and drew what she found.

This participant chose a small stoneware sculpture of a child’s head as his object. He then looked for other sculptures in the museum that may symbolize the life of this child – he found two lovers and an older looking human face. When out on the street he imagined walking like a child and made a film using his phone held at child’s head hight to get the perspective of what a child might see and contend with as they walk the city streets.

My daughter, V, chose a porcelain bowl with a lid in the shape of a rose. She chose this piece because “It looks nice”. We had some close seconds, but the Rose Box was the preferred choice.

We both drew the object in our sketch books. I asked V where we should take the Rose Box and she suggested that we take it to find other roses, to introduce it to a rose garden, to let it be with its own. So we set off to find roses. We recently read The Little Prince, and I am now wondering if the choice of the rose had anything to do with this story.

We didn’t have to go very far to find more roses. We found roses in the lobby of the museum. Out on busy University Avenue we decided to walk north towards Bloor Street. Next to the Gardiner Museum is the Lillian Massey Building a University of Toronto building at 125 Queens Park housing the Department of Classics and the Department of Medieval Studies. Around the door are rose shapes carved in relief. V stopped to draw these.

We continued north and crossed Bloor Street at the lights. On the north west corner we came to small Anglican church, The Church of the Redeemer, out front of which is a rose garden. We went to smell the roses. At this point V complained she was hungry and could go no further. We made it half a block from the museum, but managed to find three instances of roses to introduce to our Rose Box.

The Rose Box came with us for lunch. We carefully cradled it in our hands and on occasion balanced it on our heads. On the way home V became fed up with looking after the precious ceramic specimen, so without a thought of the consequences she threw it up in the air. I gasped in horror. She assured me that she threw it all the way back to the Gardiner and that it was safely back in its case in the environment controlled museum.

A few things to take into consideration when collaborating with a 4 year old: Attention span, bladder capacity, and metabolic rate differ between adult and child. She is, however, extremely patient and surprises me with the seriousness at which she accepts the tasks involved in the project.

Other objects at the Gardiner that we’d like to walk with are: a small porcelain figure or a pilgrim taking a rest, small comedia delle arte figures, ancient chinese vases with a painted scene of scholars – we thought nearby Philosophers Walk would be a good place to take the scholars.

Some reflections and further inquiries

On the whole the participants really enjoyed having these new parameters for walking and exploring the streets. They went to new places, and set themselves the task of noticing specific things related to their object – sometimes self-similar to their object, sometimes not.

The participants had to essentially create their own walk – often improvising it as they went – and were not a passive audience for a walk led by the artist. The walk couldn’t happen unless they really used their imaginations

I was asked about how this walk was useful for imagining new futures for public spaces. I will address this in a future post. I will also look into the role of the Rose and the rose garden in The Little Prince.

Next week: Another walk with V from a Toronto museum and a link out to some photos and drawings.

Taking an Object for a Walk was commissioned by CRAZY DAMES, as part of the Make It Real Project at the Gardiner Museum. CRAZY DAMES: We Built This City, was a “playful and clayful approach to engaging diverse publics in envisioning our public spaces in ways that will animate, change, and improve our everyday experiences”