Two artist walks were conducted and produced by artists and preschool children in order to explore young children’s movement and material encounters through their urban neighborhood of San Jose Japantown, CA, USA. Preschool children’s daily walks are often characterized by rules and boundaries that, while established for perceived safety, can result in the taming of movement and encounters. In our walking project with preschool children, two artists, a preschool teacher, and I co-constructed artist walks that engaged children in sensory encounters with the preschool’s neighborhood. Japantown has a civic history rooted in the Japanese American internment of World War II beginning in 1942 (Presidential Executive Order 9066), and serves as a site of memorialization via cultural events, public and performing arts, and historic walking tours. One walk engaged children in the public art of a local stone sculptor while the other walk engaged them in soundscaping with a musician. An important dimension of both walks was the production of encounters through clay impressions, stone rubbings, choreographed movement, sound collection and production, child-generated video, and researcher documentation as a means of generating data not just for analysis but also for the production of further inquiry and play in the classroom. Some of the video captures what the walking activities look like from a child’s perspective. The video also serves children’s material production of movement through space and place.

PJ Hirabayashi, a taiko drumming artist, led the children on a walk right after their workshop with San Jose Taiko. We listened to and recorded all kinds of sounds around town—cars, trucks, voices, birds, and even ukulele—and explored all kinds of sounds using our voices, too. We created loud and soft “Ohs” and sounds associated with the kiai (shouted single syllables) that accompany taiko drumming, deep breaths, and train sounds to consider what we could make with our own voices as well as to attend to what we do and do not hear in the Japantown soundscape. We listened, vocalized, and sometimes even danced as we discovered a ukulele lesson or became excited by our own body’s ability to move with sound. Once again, some children got a chance to where the Go-Pro camera attached on a harness around them, to capture their perspective of the walk. You can see how Vanessa became really excited by the sounds she was making, moving her body in circles in both excitement and in an attempt to capture everyone on camera. Later in the week, we listened to some of the audio recordings of sounds in the environment, sounds we made, and video we produced so that we could talk about the sounds of Japantown.

I examine questions of what and how movement activates, for children that might generate knowledge of children’s place-making: What, and how, does movement activate in urban spaces? What are the de-familiarizing effects that methods of sensory walking have on the given order of things? 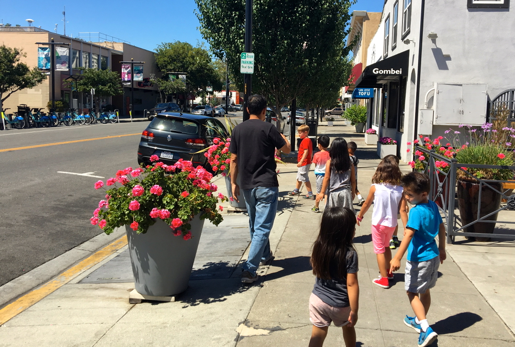