I created this walk as a methodology for exploring movement and the sensorial as a means to conceptualize both art and research as emergent, intercultural phenomena. I connect the unfolding materialization of walking to the process of becoming intercultural, or the state of in-betweenness. Culture is not just something that we are born into and tacitly embody but is also something we improvise, create and envision through the everyday practices in which we engage.

The walk took place in the King’s College neighbourhood in Cambridge, England, and combined elements of chance with sensorial provocations. Stopping at historic buildings or sites of interest, participants familiar with the area gave historical, cultural, or personal information, acting as informal guides. I then asked participants to choose a number from 1-6, each of which held a corresponding prompt that I had created ahead of time but that no one knew in advance, introducing the element of chance, play, and improvisation.

Standing in front of the landmark, Corpus Clock, someone chose #5: We created human sculptures that responded to or interacted with the environment.

At the historic The Eagle pub, the chosen prompt, #4, was to move in the space/place in a way interacts and dances with the environment: If the space/place could tell you how to move, what would it say?

Outside of St Bene’t’s Church, the oldest standing building in Cambridge, we looked for borders an edges in the built and living environment: what defines them? Who made them? Are there metaphorical, symbolic, or psychological borders present? How do we meet the resistance? Outside of an old library that was now the site of a Jamie Oliver restaurant, we looked for spaces or places of transition? Are they physical, metaphoric, symbolic, and/or psychological? Can we move through them? What blocks us?

At the Fitzwilliam museum, we listened for one minute and subtracted the loudest sound: What needs to be heard? The processes of chance with sensory encounters defamiliarized the act of walking, emphasizing the ways in which walking is an intercultural practice of entanglement with and by a diverse range of actants such as activities, people, objects, discourse, ephemera, memory, non-discursivity, the senses, and the immediate environment. 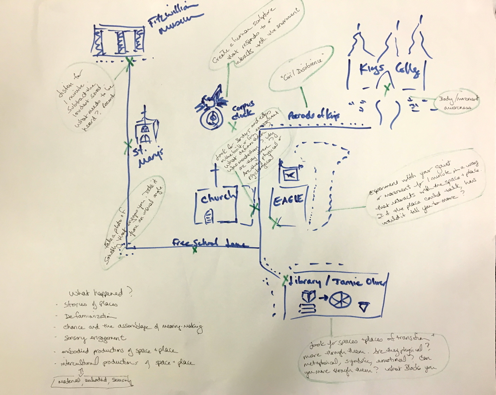