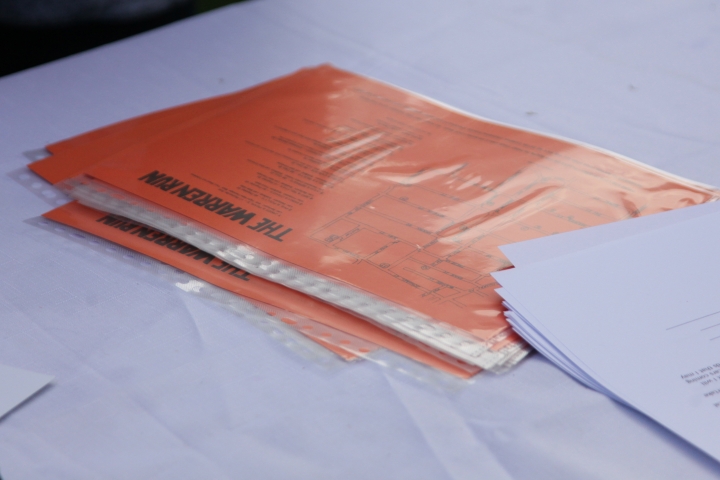 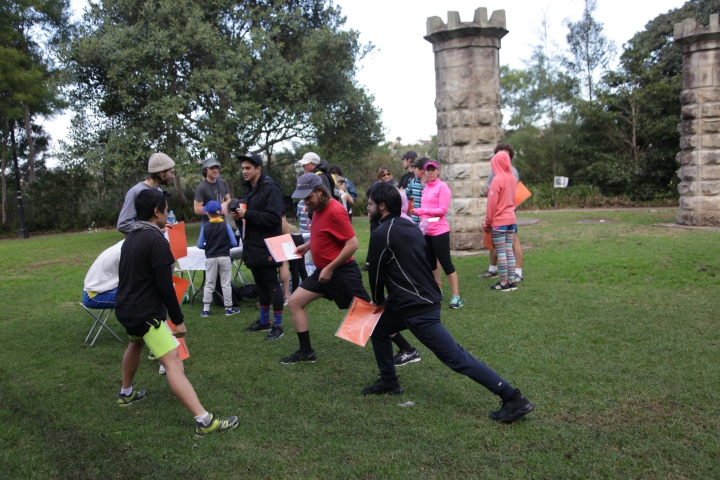 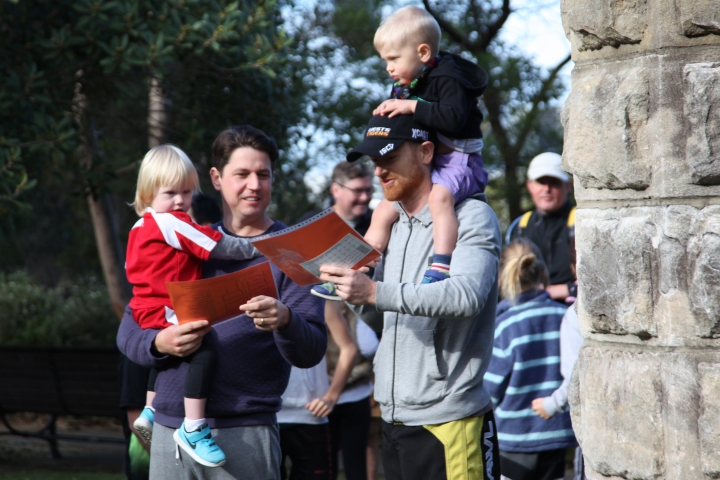 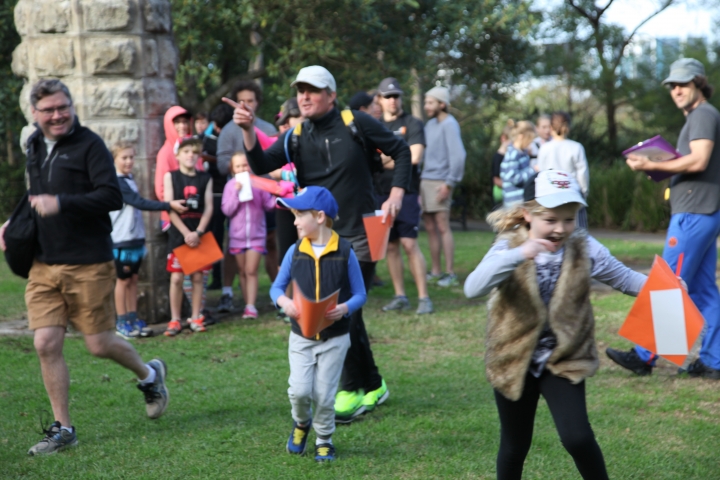 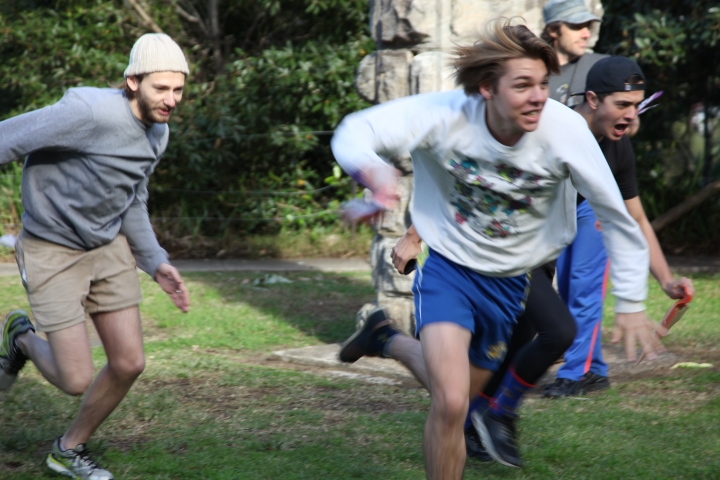 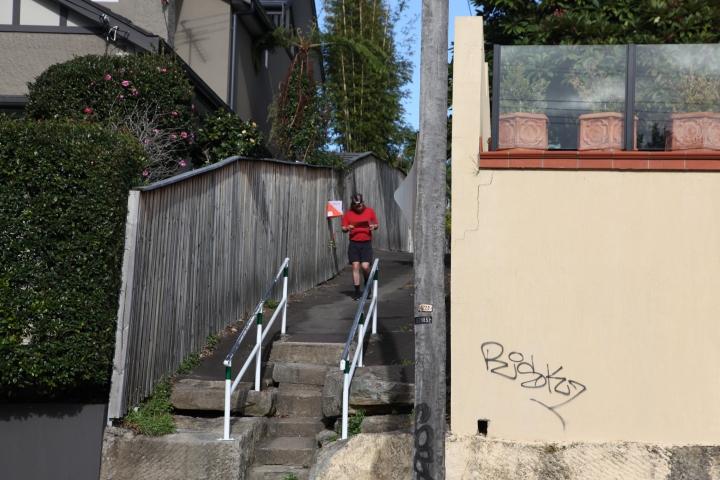 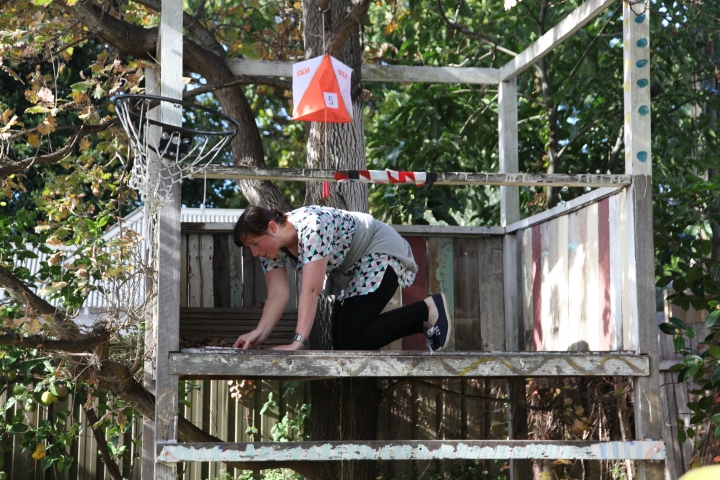 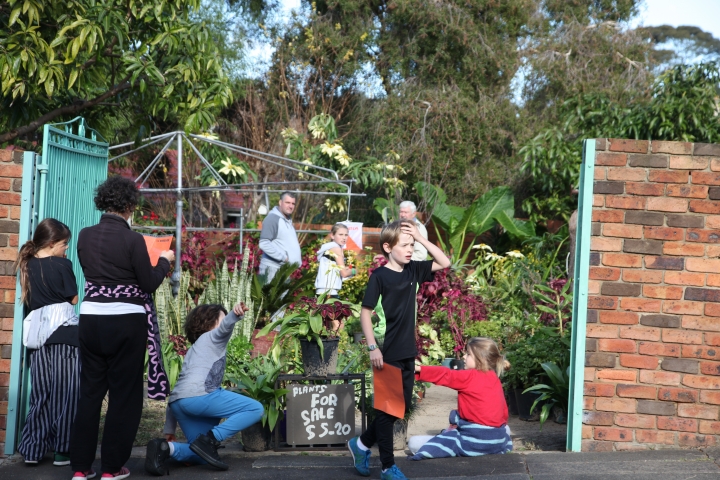 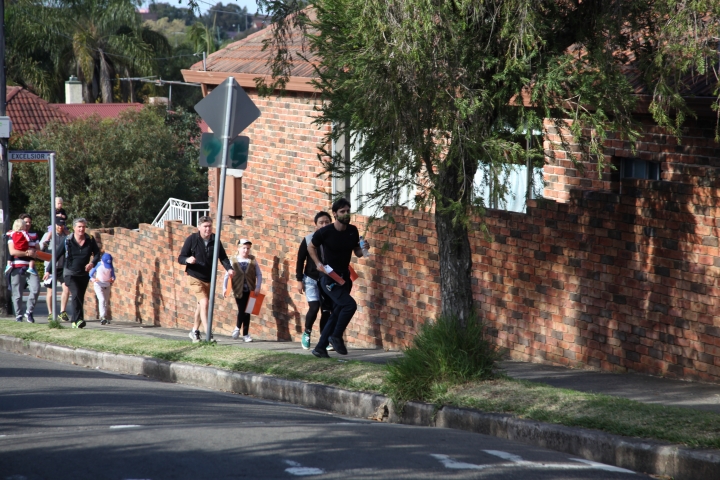 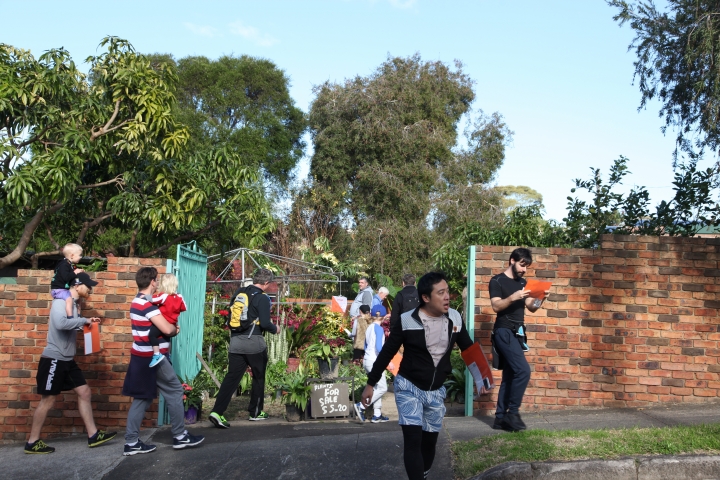 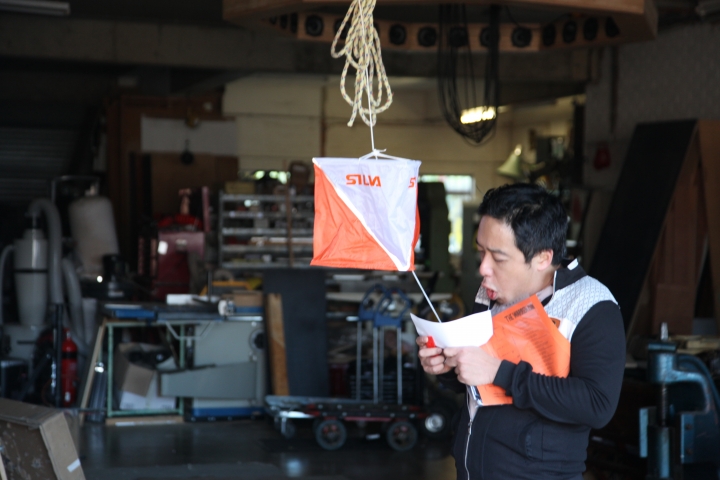 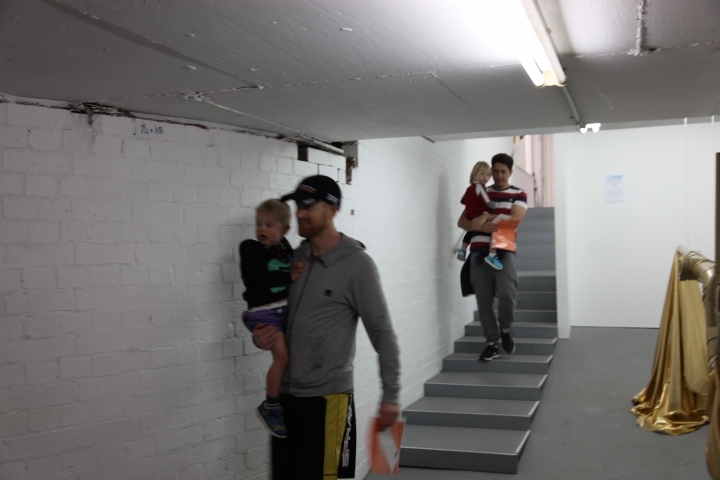 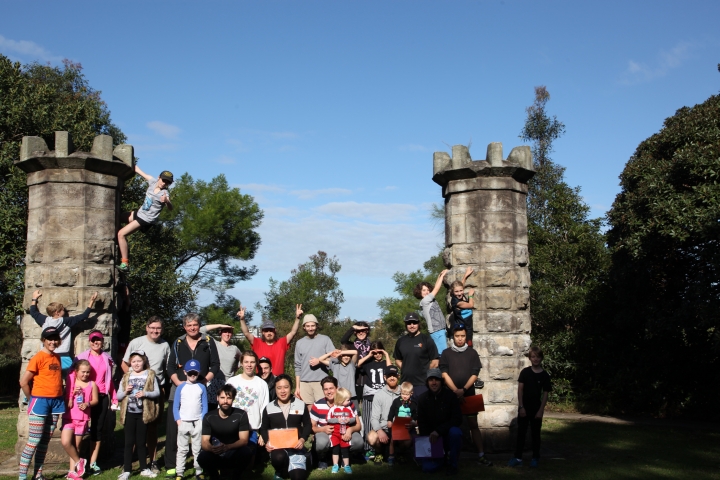 The Warren Run was a participatory event in a residential suburban area called ‘The Warren’, in the suburb of Marrickville in Sydney’s inner-west. Held on a glorious sunny Sunday morning in June the race was initially scheduled for Sunday the 5th of June, but was postponed 1 week due to heavy rain and storms.

The concept for the event was to have a running race in a suburban area, which took participants through residents’ private properties, inside houses, through backyards and over fences. The work aimed to disrupt the normal flow of human traffic through a typical suburban area, breaking some of the rules of this type of residential space and how we engage with it physically.

The race worked like a simplified version of orienteering. The orange and white markers used were official orienteering markers and 16 of these were placed as checkpoints at different locations along a route approximately 2.5 km in distance. Prior to the race, each runner (or group of runners) received a simple map with a list of addresses and some basic directions for each address.  For example, ‘Julia and Bernie’s, 38 Cary St, Location: Backyard Cubby House. They also were given a punch card, which they could punch at each checkpoint with a unique imprint to prove they had made it to each checkpoint (this is also official orienteering equipment, albeit ‘old-school’ equipment as they mostly use electronic tags these days).

Runners left at 1 minute intervals, with their departure and arrival times recorded. So, effectively the race was a time trial. Runners could take whatever route they liked, just as long as they made it to each checkpoint.

We had around 20 participants. A nice mix of fit ‘runners’, non-regular runners, artsy types, families with kids aged 7-12, and a pair of dads who carried their toddlers on their shoulders the whole way!

The route included: a cubby house stop at ‘Julia and Bernie’s’, where the hosts had supplied oranges and jellybeans; a run straight through ‘Josh and Carlie’s’ living room; a rushed visit through a local art gallery at ‘Airspace Projects;’ and a bootleg nursery in ‘Branco’s Backyard’.

Participants really enjoyed the treasure hunt aspect of the race combined with the heightened sensory state achieved through running and being caught up in a race. They also commented on the unique experience of visiting all these people’s homes and in some instances meeting the people, but being in the act of running and passing through and only getting these quick little glimpses into people’s private spaces. For some who lived in the area, it felt like a place they really knew well had been opened up a little bit.  They discovered new things about a place they were otherwise very familiar with.

For the record, the race was won by the pairing of locals Adam and Geoff with a time of around 32 min. Second place was a group of 5 boys aged 9-11, Warre, Archer, Tom, Les and Ubu and chaperoned gallantly by Mirabelle.  There was one disqualification for Kev, who missed a checkpoint when he decided to take an unusual route in order to get quickly to the toilet stop at the gallery. Otherwise, all participants completed the race competently and without incident.

It was exciting and fun to put on this event. It had a great community feel to it, was very low key and really accessible to anyone who wanted to give it a go. It really opened up the community in a small, physical, simple, fun way and there’s potential to repeat the event next year and get more people involved.