Stone Walks on the Bruce Trail was a successful WalkingLab event that convened on the Chedoke to Iroquoia Heights loop trail, a 9-km section of the Radial Trail and Bruce Trails on April 1st, 2017. The event brought together more than 70 walkers to think-with the geologic force of this place. The 4-hour walk was punctured by ‘pop up’ lectures by geologists, activists, and indigenous scholars and activated by a local arts collective TH&B, who critically intervened with typical ways that walkers use these trails.

Walking where the Chedoke Radial Trail and Bruce Trail merges in Hamilton, Ontario is a journey through a geological ecology that was shaped over 30 million years. Approximately 450 million years ago, during the Ordovician period, the area now known as the Niagara Escarpment was covered by sea teaming with coral and invertebrates, including molluscs and arthropods. The escarpment was shaped by sediments deposited on top of the sea floor that over eons became the sedimentary rock, shale, sandstone, and dolostone we see today. Many of the layers are comprised of visible fossils of coral, sea sponges, and brachiopods.

WalkingLab has been thinking-making-doing research that seeks to queer walking practices that govern bodies including landscapes. Queer is used in a general sense as odd and strange, and in a specific sense of referring to LGBTQ identities. Queer has been used to unsettle norms and hierarchies of humanness. The meaning of queer or ‘to queer’ continues to move, probe, and shift beyond individual gender or sexual orientation markers, and towards a more complex understanding of queer that doesn’t only represent particular kinds of queer bodies. However, when viewed through this framework the queer identity and the ability to queer is tied to western rational individualism and the liberal humanist subject who can afford to be queer and to queer. And consequently, tied to the liberal humanist subject who asserts his or her agency to queer or be queer. As such, we recognize the complex and intense ways that queer can affect Indigenous, racialized, and sexualized bodies.

WalkingLab’s event sought to disrupt the heteronormative, settler colonial ways in which walking is conventionally understood through three heteronormative tropes –the flaneur, the derive, and the romantic colonial long walk. 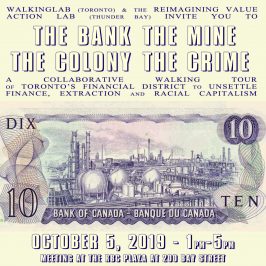 PhD scholarship to work with @BlaiseMindy and colleagues. 😍

Hey creative practitioners and artists interested in developing creative ways to intervene and disrupt everyday sexisms in Australian Universities.....AND get a PhD....check out this opportunity! @FEAS, @Emilyem2, @drjackieullman, @theedithsecu, @JoPollitt4