Two artist walks were conducted and produced by artists and preschool children in order to explore young children’s movement and material encounters through their urban neighborhood of San Jose Japantown, CA, USA. Preschool children’s daily walks are often characterized by rules and boundaries that, while established for perceived safety, can result in the taming of movement and encounters. In our walking project with preschool children, two artists, a preschool teacher, and I co-constructed artist walks that engaged children in sensory encounters with the preschool’s neighborhood. Japantown has a civic history rooted in the Japanese American internment of World War II beginning in 1942 (Presidential Executive Order 9066), and serves as a site of memorialization via cultural events, public and performing arts, and historic walking tours. One walk engaged children in the public art of a local stone sculptor while the other walk engaged them in soundscaping with a musician. An important dimension of both walks was the production of encounters through clay impressions, stone rubbings, choreographed movement, sound collection and production, child-generated video, and researcher documentation as a means of generating data not just for analysis but also for the production of further inquiry and play in the classroom. Some of the video captures what the walking activities look like from a child’s perspective. The video also serves children’s material production of movement through space and place.

Ken Matsumoto, a local stone sculptor, took the children on a walk to some of his public art works. First stop was the concrete blocks that Ken made many years ago. When we got there, the children climbed and touched the surfaces of the blocks covered in tiles that replicated children’s drawings from many years ago.

After playing on the blocks, we went and looked at a manhole cover. Ken discussed the ways in which artists in Japan have painted manhole covers in artful ways, and told them about his interest in painting one. We then stopped at a stone sculpture close to the Buddhist church. While there, we worked with exploring textures in the environment primarily through two art forms: clay impressions and rubbings. Working with “clay-dough” (a mixture of flour, water, salt and vegetable oil that can either be baked or air-dried), we pressed our clay into rocks, earth, metal grates, and other places that might have textures. The children were interested in the ways in which dirt stuck to the clay, the different types of surface textures that they could capture, and the feeling of the soft clay-dough against hard surfaces. Children also made rubbings – a technique of pressing paper against and object and rubbing crayon (or any soft material) onto the paper so that the surface beneath the paper “transfers” onto paper.

We then walked to one of the World War II commerative memorials on the corner of Fifth and Jackson, where “Mr. Ken” discussed the memorial and then demonstrated the ways in which the metal structure could also make sounds. Children took turns knocking on the metal memorial to hear the sounds it would make. Mr. Matsumoto’s art gallery on the corner of Fifth and Jackson Streets, where the children interacted with some of the gallery’s rock sculptures (the ones with water baths were a hit on this hot day), heard what some of Ken’s sculpting equipment sounds like, and rang a large bell in his gallery. Later that afternoon, we cut some of the rubbings into shapes to create new patterns and stories. 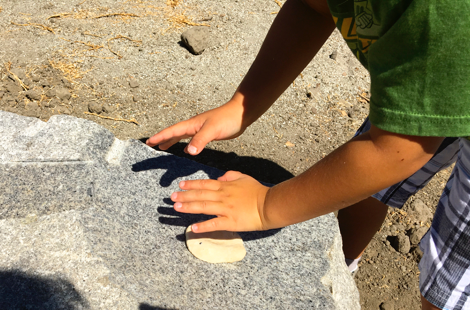